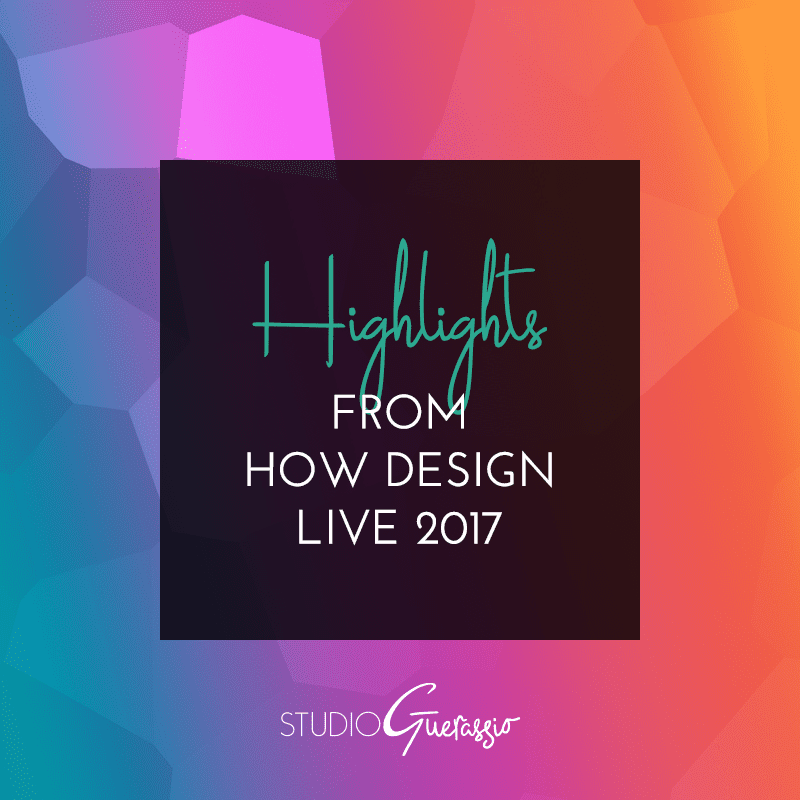 Highlights from HOW Design Live 2017

I spent last week in Chicago, attending the amazing HOW Design Live conference for the first time ever. It was a jam-packed week full of seminars, keynotes, exhibitors, and more. I’ll probably need at least another week to properly process everything. But in going through my notes, I realized there were quite a few speakers who distilled their ideas down into very quotable bits. And I wanted to share some of those here today. There’s wise words, words to make you think or chuckle, and a good overview of a lot of the topics covered at this year’s conference.

“’What do you do for a living?’ Whatever I can get away with.”
– Timothy Goodman on his adopted slogan. I wasn’t super familiar with his work before, but seeing some of his series on Instagram has gotten a few ideas cooking for me.

“People in the center are never going to be the big change makers.”
– Sam Harrison on being weird. His advice: do so many uncommon and unusual things that you surpass weird and enter genius territory. I can get behind this.

“It’s not what the brief or identity standards says you can or can’t do; it’s about what it doesn’t say you can’t do.”
– Stefan Mumaw on creative villainy and circumventing the rules.

“‘Design thinking’ packages a designer’s way of working for a non-designer audience by codifying their processes into a prescriptive, step-by-step approach to creative problem solving – claiming that it can be applied by anyone to any problem. This is bullshit.”
– Natasha Jen on why a single way of thinking or single process is not the panacea of design. Design is messy and complex, and one approach is never going to be good for every possible problem and project. Amen to this.

“Brands that recognize our feelings and validate our humanity are hard NOT to engage with.”
– Valerie Aurilio on the eternal truths of design: empathy and storytelling.

“There is always a crossover between print and digital.”
– Indra Kupferschmid on how no project is strictly one or the other.

“Color is only ever and always 3 things: hue, saturation and value. Knowing this makes working with color so much simpler.”
– Jim Krause on how distilling color down to its basic parts makes finding that perfect shade easier.

“If you’re ever in a rut with your work, ask ‘what might get me arrested?’”
– Kelli Anderson, regarding her project of printing and distributing a fake New York Times edition that painted the world as a better place than it is. She is up to some cool stuff, definitely check her out.

“The desire of the manager to speed up the process and impose a deadline on the designer is the single most detrimental thing to creative people, the biggest killer of good design. […] The single most important skill for a creative life is getting the world to back off.”
– Malcolm Gladwell speaking directly to every designer’s soul, even though he’s not a designer himself. Everyone should check out his podcast: Revisionist History. I could listen to this guy talk for hours. Not because he has a particular melty voice (he’s no Benedict Cumberbatch), but just because he’s so interesting.

Yeah, we had an impressive lineup of speakers and presenters. I hope you enjoyed some of these tidbits and maybe clicked thru to connect with some of these creative minds.

Do you have a favorite quote from above? If you also attended HOW, what’s a great quote that I missed?

(a girl can’t be in every session at once, after all)