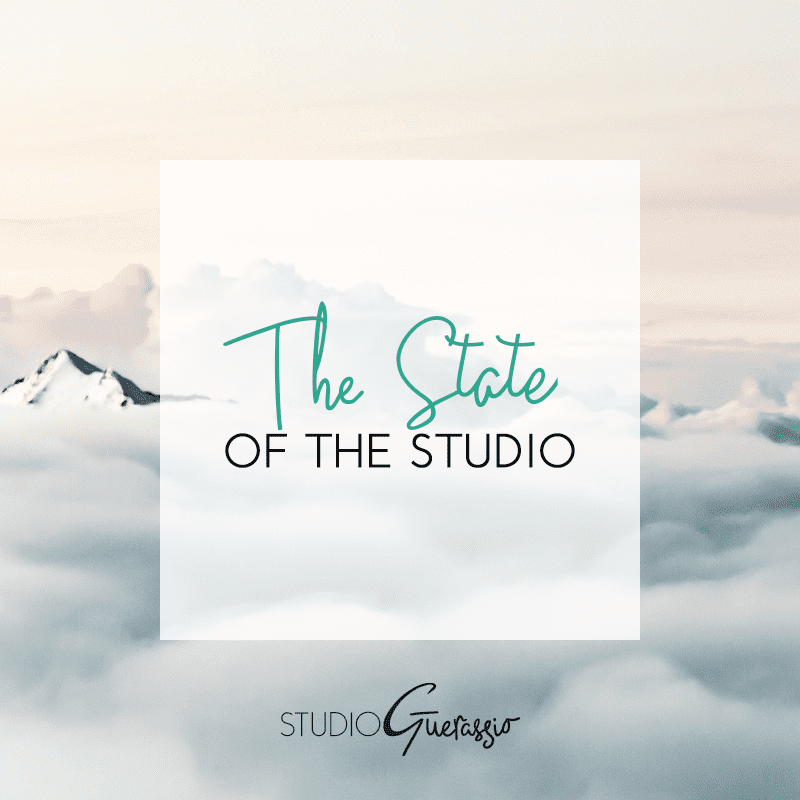 The State of the Studio

We are coming up on Studio Guerassio’s official 2 year birthday. Woohoo! 🎉

In light of that, it seemed a good time to announce some upcoming changes and exciting news.

When I officially formed Studio Guerassio 2 years ago, I was coming right off of a month away for my wedding and honeymoon. To say I rushed through the branding process when I got back is an understatement. So for the past few months, I’ve been taking my time, really thinking about what I want Studio Guerassio to be and its place in the design world. I even took myself through my own branding worksheet as a guide (it really is helpful, guys – I can vouch for it from both sides now). And I’m happy to say the new branding (visual and otherwise) is nearly ready.

It won’t be a drastic change. More a refining or fine-tuning. I’m calling it a brand refresh instead of a re-brand for that reason. I feel like the new logo better captures the personality and style of my business, but is not so different from what I’ve established that it won’t be recognizable as the same company. And I’m significantly paring down the website, which will be a welcome evolution.

Here’s what to expect in the next few weeks:

⇒ I will be out of town/out of office all of next week (the first full week of October). I’ve got a post scheduled for while I’m gone and I might pop in on social media a teensy bit, so it will mostly be business as usual. Aside from, you know, emails and actual design work, which will be on hold.

⇒ When I get back (week of October 9th), this site will be under construction for a few days while I launch the brand refresh for Studio Guerassio. There will be no new blog post that week. When the site comes back it will have a new logo, new layout, new streamlined copy, etc. This blog is staying, though I plan on going down to a post every other week instead of every week. That will give me time to dig into more posts like the Brand Nuance series and Covers Reimagined.
Teaser: I have a new series I’m launching later this fall that I’m pretty excited about. If you love books and food, keep an eye out.

⇒ I plan to have all of the new stuff live and back to normal operation by October 16. Since Studio Guerassio’s birthday is on October 14th according to the paperwork, I’m rather pleased with how it all lines up. 😀

So that’s what’s in the works coming up. I hope you’ll all stick around to see the new look, and I’ll catch you on the flip-side!

Have you done a rebrand for your business before? How did you roll it out?